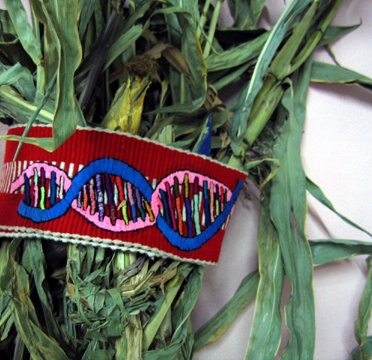 This was Hilaria's interpretation of my DNA design, on top of the regular faja pattern. It would have been interesting, if next to impossible, to have Rosa weave the DNA helix pattern into the white bars of the faja.

The amount of labor in both the weaving and the embroidery is unimaginable. I initially thought I would learn to weave and quickly realized I did not have the constitution nor the hand-eye coordination to stand with the backstrap loom. Likewise, I thought I might embroider one or two fajas. My technique was sad.

As I write these little descriptions, over 3 years later, I'm struck by how the physical and communication processes of trying to carry this project to fruition mirror some of my thoughts, missteps, and developing understanding about working in indigenous México and a colonial mindset.

In art school, as in western culture, the genius/individual is revered. Who is the author of these faja images? This work? There is still this lingering ownership: my idea, my designs, my imagery- yet the physical production was entirely in the hands of a small group of women, most of whom did not care about or understand what I was trying to communicate, and upon whose efforts my project was entirely dependent. The idea of "helping" through artwork contains uncomfortable echoes of the white woman's burden. Indeed, whenever I was lauded by someone from my first world home for working in an impoverished region, I began to cringe. Who was I making the work for, and to what end?